I’m guessing there’s a good chance you do not know who Edward Gorey is. But, if you are a fan of Tim Burton, Neil Gaiman, or Lemony Snicket, you’re already a fan of Gorey. He influenced all of them – and many more – and once you are familiar with his work, you’ll recognize it instantly. It is the weird, intriguing, and macabre stories and illustrations that inspired The Nightmare Before Christmas, Coraline, and A Series of Unfortunate Events. I’ve been a fan of Gorey’s work for nearly two decades now (ugh, that makes me sound old), and I was so excited to get the opportunity to read Mark Dery’s new biography of Gorey, Born to Be Posthumous. 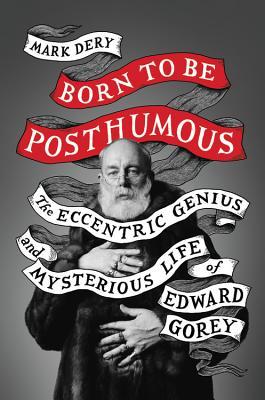 (From Goodreads) The definitive biography of Edward Gorey, the eccentric master of macabre nonsense.

From The Gashlycrumb Tinies to The Doubtful Guest, Edward Gorey’s wickedly funny and deliciously sinister little books have influenced our culture in innumerable ways, from the works of Tim Burton and Neil Gaiman to Lemony Snicket. Some even call him the Grandfather of Goth.

But who was this man, who lived with over twenty thousand books and six cats, who roomed with Frank O’Hara at Harvard, and was known–in the late 1940s, no less–to traipse around in full-length fur coats, clanking bracelets, and an Edwardian beard? An eccentric, a gregarious recluse, an enigmatic auteur of whimsically morbid masterpieces, yes–but who was the real Edward Gorey behind the Oscar Wildean pose?

He published over a hundred books and illustrated works by Samuel Beckett, T.S. Eliot, Edward Lear, John Updike, Charles Dickens, Hilaire Belloc, Muriel Spark, Bram Stoker, Gilbert & Sullivan, and others. At the same time, he was a deeply complicated and conflicted individual, a man whose art reflected his obsessions with the disquieting and the darkly hilarious.

Based on newly uncovered correspondence and interviews with personalities as diverse as John Ashbery, Donald Hall, Lemony Snicket, Neil Gaiman, and Anna Sui, BORN TO BE POSTHUMOUS draws back the curtain on the eccentric genius and mysterious life of Edward Gorey.

Things you need to know about Edward Gorey: He loved cats. He loved books. He was was a prolific artist and author. And he inspired modern gothic art as we know it. I’ve been a fan of Edward Gorey since before I was old enough to really know who he was. He inspired some of my favorite authors, and I just truly love the work that came from or was inspired by his wonderfully weird mind.

I am just now realizing how difficult it is to review a biography. Really, all I have to say is that this one was great. It was comprehensive and well-written, and I thoroughly enjoyed it. I am really glad to have learned more about Edward Gorey, and I think this biography was the perfect way to do that. I feel like I have a better understanding of both Gorey and of the art.

★★★★☆ – This wasn’t my all-time favorite biography (those tend to belong to historical figures), but it was really good. I learned a lot about Gorey, and I feel like I have better insight into who he was and how he inspired so many other incredible artists. If you’re looking for a good October read, pick up some of Gorey’s books, and then grab this biography when it comes out next month.

Born to Be Posthumous will be available in bookstores November 6. You can preorder a copy on Amazon now.

7 thoughts on “Book Review | Born to Be Posthumous”