I am always up for a good historical fiction novel. And since I loved my first Christopher Buckley book (The Relic Master), I was really excited to read another and immediately jumped at the chance to review his newest novel, The Judge Hunter. I’m an anglophile with a degree in American history, so this seemed like it would be the perfect book for me. 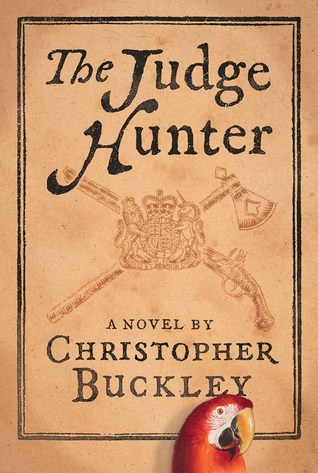 (From Goodreads) The latest comic novel from Christopher Buckley, a hapless Englishman embarks on a dangerous mission to the New World in pursuit of two judges who helped murder a king.

London, 1664. Twenty years after the English revolution, the monarchy has been restored and Charles II sits on the throne. The men who conspired to kill his father are either dead or disappeared. Baltasar “Balty” St. Michel is twenty-four and has no skills and no employment. He gets by on handouts from his brother-in-law Samuel Pepys, an officer in the king’s navy.

Fed up with his needy relative, Pepys offers Balty a job in the New World. He is to track down two missing judges who were responsible for the execution of the last king, Charles I. When Balty’s ship arrives in Boston, he finds a strange country filled with fundamentalist Puritans, saintly Quakers, warring tribes of Indians, and rogues of every stripe. Helped by a man named Huncks, an agent of the Crown with a mysterious past, Balty travels colonial America in search of the missing judges. Meanwhile, on the other side of the Atlantic, Samuel Pepys prepares for a war with the Dutch that fears England has no chance of winning.

Christopher Buckley’s enchanting new novel spins adventure, comedy, political intrigue, and romance against a historical backdrop with real-life characters like Charles II, John Winthrop, and Peter Stuyvesant. Buckley’s wit is as sharp as ever as he takes readers to seventeenth-century London and New England. We visit the bawdy court of Charles II, Boston under the strict Puritan rule, and New Amsterdam back when Manhattan was a half-wild outpost on the edge of an unmapped continent. The Judge Hunter is a smart and swiftly plotted novel that transports readers to a new world.

To be completely fair to this book, I should mention that I read it immediately after reading another (completely different) historical fiction novel that completely blew me away. So my expectations were perhaps a bit inflated. But I still really enjoyed this book. I love how Christopher Buckley injects his historical fiction with so much humor. It makes for a fun read, and that is always something I like when it comes to historical fiction. I definitely laughed out loud a few times while reading this.

That said, I did have a few problems with this book. The first is that there were a few historical inaccuracies (Winthrop was governor of Massachusetts, not Connecticut) that drove my inner history nerd just a little bit crazy. It wasn’t anything terrible, but if a book features historical figures as characters, I’d prefer they remain as true to reality as possible. Changing facts just to make it more convenient for the author isn’t something I like seeing in novels. My other issue with this book is how it handles female characters. There are far too few of them, and the ones who did make it into the story are one-dimensional and are mostly there to annoy the male characters. I know women weren’t making history on the same scale in the 17th century, but they were a part of it. And they certainly did more than nag and demand jewelry and favors. Again, this isn’t necessarily a deal-breaker (because it’s not like the king would have sent a woman to hunt down the men who killed his father), but it was a bit disappointing. Same could be said of the portrayal of Native Americans in this book. I don’t think it’s particularly historically inaccurate (though feel free to argue that if you’re more familiar with the topic than I am), but I was hoping they would play a bigger role than just “watch out for warring tribes on the trail”. I would have loved to see more examples of Native Americans and women in this book.

Aside from my complaints, the story was pretty interesting. It’s based off of real events (though don’t take it too seriously – obviously the author took a few liberties), and it’s definitely a different take on early American history than I’ve seen before. I did like seeing colonial America from the perspective of a (naive) Englishman – it was fun to see his reactions to how the colonists lived. The story did slow down a bit in the middle, which really affected my reading pace, but it picked up a bit by the end, and I do think it was a pretty solid novel.

★★★☆☆ – Overall, The Judge Hunter was a fun read. It didn’t blow my mind, and there were a few parts I didn’t love, but it wasn’t bad. If you want a fun historical read, definitely check out Christopher Buckley’s work.

The Judge Hunter will be available in bookstores May 1 (you can preorder on Amazon now).

To get the audiobook for free, use this link to sign up for a free trial of Audible and choose The Judge Hunter as one of your two free books.