It’s been a while since I’ve read a true-crime book (I think the last one was Helter Skelter). But since I’ve been binge-watching crime documentaries lately, I thought it was time. One that kept popping up was a fairly recent publication, The Fact of a Body by Alexandria Marzano-Lesnevich. I was intrigued by the idea of combining true crime with memoir, so when it was on sale on Audible, I picked it up. 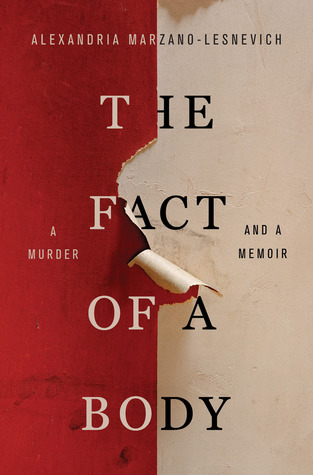 (From Goodreads) Before Alexandria Marzano-Lesnevich begins a summer job at a law firm in Louisiana, working to help defend men accused of murder, she thinks her position is clear. The child of two lawyers, she is staunchly anti-death penalty. But the moment convicted murderer Ricky Langley’s face flashes on the screen as she reviews old tapes―the moment she hears him speak of his crimes―she is overcome with the feeling of wanting him to die. Shocked by her reaction, she digs deeper and deeper into the case. Despite their vastly different circumstances, something in his story is unsettlingly, uncannily familiar.

Crime, even the darkest and most unsayable acts, can happen to any one of us. As Alexandria pores over the facts of the murder, she finds herself thrust into the complicated narrative of Ricky’s childhood. And by examining the details of Ricky’s case, she is forced to face her own story, to unearth long-buried family secrets, and reckon with a past that colors her view of Ricky’s crime.

But another surprise awaits: She wasn’t the only one who saw her life in Ricky’s.

An intellectual and emotional thriller that is also a different kind of murder mystery, The Fact Of a Body is a book not only about how the story of one crime was constructed―but about how we grapple with our own personal histories. Along the way it tackles questions about the nature of forgiveness, and if a single narrative can ever really contain something as definitive as the truth. This groundbreaking, heart-stopping work, ten years in the making, shows how the law is more personal than we would like to believe―and the truth more complicated, and powerful, than we could ever imagine.

The Fact of a Body deals with some really uncomfortable topics. So it took me a while to realize that the reason I felt uncomfortable the entire time I was reading this wasn’t the subject matter. It was the way these stories were told. This book definitely falls into the realm of “creative nonfiction” – and I appreciate creative nonfiction done well – but, in this case, I felt the author took a few too many liberties with the story she was telling. This book is half memoir, half true-crime, which sounded like it could be an interesting read. However, the crime is only very loosely connected with the author’s own story (she was an intern in the law office defending the murderer in his second trial), and I don’t think she did enough to tie the two together.

I do appreciate the author sharing her own story and think this might have been a decent memoir on its own. But I had trouble understanding why she felt the need to also delve into the murder of Jeremy Guillory. It’s difficult to be critical of this book, since I’m sure it took a lot of courage to write, but I just didn’t get it. To me, it felt very much like she wanted to connect her own life to Ricky’s in an attempt to understand him. Which, I get. But I think this was probably a more cathartic writing experience than it is a good reading experience. Not all sexual assaults are the same. I understand the impulse to empathize and connect with someone who has experienced something similar, but this was maybe going a bit too far. She also gives away the major events of both stories in the first third of the book, and spends the rest of it trying to explain and connect them, which just felt unnecessary and, in my opinion, didn’t really work.

My biggest issue with this book is the author’s descriptions of the events surrounding the murder. She superimposes the details of her own life onto what happened to someone else (assigning them thoughts and emotions and, at one point, her grandmother’s nightgown), and it was enough to make me feel uncomfortable. The author was a bit gratuitous in her comparisons and assumptions, and that honestly ruined the story for me. The more I read, the more I felt myself wondering why exactly she was telling this story, why she felt the need to tell this story, and how much of this “true crime” was actually true.

I also wasn’t a fan of the writing. It is overly descriptive, which is even more obvious since the author is describing real events she did not witness. I had a very hard time trusting any of the details in this book, and that made it more annoying that there were so many of them. I think if this had been more matter-of-fact, I might have enjoyed it more. But I just couldn’t read more than a few pages at a time before becoming either too uncomfortable or annoyed to continue.

Note: I did listen to the audiobook for the first third of the book, but found the author’s narration so grating and hard to understand at times that I had to borrow a digital copy from the library to finish it.

★★☆☆☆ – Unfortunately, The Fact of a Body wasn’t for me. I know a lot of people really enjoyed it, but I couldn’t get past the creative liberties the author took with a story that she wasn’t really part of. I do give her credit for the memoir part of this book, though, because I can imagine how difficult that must have been to write. The idea of combining memoir and true-crime is interesting and creative, but I just don’t think it worked here.

The Fact of a Body is available in bookstores now (order on Amazon here).

2 thoughts on “Book Review | The Fact of a Body”