Mystery is probably one of my least-read genres. I do love the occasional mystery novel, but most of the time I’m just too overwhelmed by the number of them to pick anything other than the books everyone’s talking about. Lately, I’ve been in the mood for a good mystery (thank all the ID shows I’ve been binge-watching) and when I got an email about Olivia Kiernan’s debut novel, Too Close to Breathe, it sounded perfect. 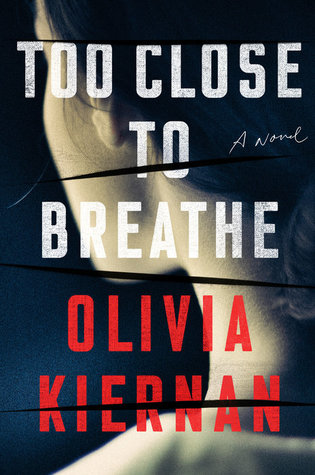 (From Goodreads) In a quiet Dublin suburb, within her pristine home, Eleanor Costello is found hanging from a rope.

Detective Chief Superintendent Frankie Sheehan would be more than happy to declare it a suicide. Four months ago, Frankie’s pursuit of a killer almost ended her life and she isn’t keen on investigating another homicide. But the autopsy reveals poorly healed bones and old stab wounds, absent from medical records. A new cut is carefully, deliberately covered in paint. Eleanor’s husband, Peter, is unreachable, missing. A search of the couple’s home reveals only two signs of personality: a much-loved book on art and a laptop with access to the Dark Web.

With the suspect pool growing, the carefully crafted profile of the victim crumbling with each new lead, and mysterious calls to Frankie’s phone implying that the killer is closer than anyone would like, all Frankie knows is that Eleanor guarded her secrets as closely in life as she does in death.

As the investigation grows more challenging, Frankie can’t help but feel that something doesn’t fit. And when another woman is found murdered, the same paint on her corpse, Frankie knows that unraveling Eleanor’s life is the only way to find the murderer before he claims another victim . . . or finishes the fate Frankie only just managed to escape.

Too Close to Breathe pleasantly surprised me. It’s been a while since I’ve read a mystery novel this engrossing. It was such a fun read, and definitely satisfied my craving for a good murder mystery. I particularly enjoyed Kiernan’s writing. For a debut novel, it was really impressive how she was able to maintain a good pace and create really vivid imagery. Somehow, this felt like a movie, and I loved that.

I also really liked the mystery. There were a lot of players, but everything made sense and wasn’t at all convoluted or confusing. My only complaint is that – minor spoiler – the killer isn’t introduced until later in the book. I like trying to guess who the killer is, and introducing them right before they’re revealed as the killer is a bit of a pet peeve of mine, but it’s a minor issue.

The characters were pretty great, too. They were fairly stereotypical (basically, characters you’d expect in a contemporary detective novel), but they were still interesting and dimensional. I do think this book could use a bit more of Sheehan’s background, but I suppose we’ll get that in future installments. But I did particularly like her connection to the crime; it made it easier to get invested in the story and with the characters.

★★★★☆ – I really enjoyed Too Close To Breathe, and will definitely be reading the next book in this series! It reminded me a lot of some of my favorite crime shows, and I’m excited to have discovered a new series I can look forward to reading more of.

Too Close to Breathe will be available in bookstores starting April 3. You can preorder it on Amazon now!

This book was provided to me by the publisher. All opinions are my own.

2 thoughts on “Book Review | Too Close to Breathe”